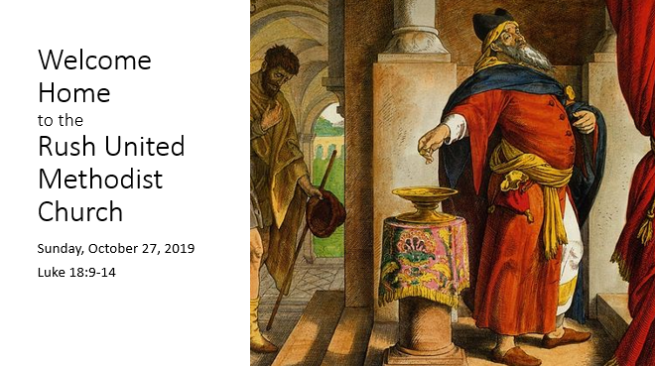 He also told this parable to some who trusted in themselves that they were righteous and regarded others with contempt: “Two men went up to the temple to pray, one a Pharisee and the other a tax collector.

The Pharisee, standing by himself, was praying thus, ‘God, I thank you that I am not like other people: thieves, rogues, adulterers, or even like this tax collector. I fast twice a week; I give a tenth of all my income.’

But the tax collector, standing far off, would not even look up to heaven, but was beating his breast and saying, ‘God, be merciful to me, a sinner!’

a parable that sets a trap.

The best traps are camouflaged in simplicity and in plain sight.

Do not be fooled by this simple parable!

Jesus sets this trap for any unsuspecting or uninformed disciple following him.

This parable is a trap set for you and me.

Less the trap of this simple parable spring

and convict us of heresy and contempt.

You heard me right.

One wrong step and

you or I can step into the cow pie of heresy;

of violating two of the big ten commandments:

“I Am the Lord your God. Thou shall not have any gods before me.”

One wrong step in a different direction will actuate the trap door;

dropping us into the dungeon of contempt;

exposing the disdain we harbor for others.

Heresy is a belief or opinion contrary to orthodox Christian doctrine.

Where is the heresy here?

and how can I learn to spot it, and

avoid stepping in it?

Pharisees in the time of Jesus often get a bad rap.

They aren’t villans, not hypocrites, nor necessarily adversaries of Jesus.

Scripture tells us that some are even sympathetic to Jesus.

emphasize obedience to the law of Moses.

It was a movement of both lay and rabbinical clergy.

Righteousness according to the law ensured

and for keeping the rites of kosher and cleanliness,

a way to encounter God’s holiness.

You or I could easily be Pharisees.

Wonderful, we should attend worship, too.

The Pharisee prays a prayer of thanksgiving to God.

Great, we should offer to God prayers of thanksgiving, too.

This is when the wheels come flying off.

He begins with the pronoun, “I”.

Three more times the Pharisee starts with “I”.

I exceed the minimum requirement to fast once a week.

I fast twice a week!

I exceed the minimum requirement to tithe 10% of my net income.

the Pharisee is so full of himself;

He’s so full of his own righteousness

that he has lost the desire to place his whole trust in the Lord.

“I trust in myself and my own righteousness!” he’s thinking to himself.

He doesn’t need the Lord.

His trust is in his ability to follow the law of Moses without fail,

making his self-confidence greater than

his trust in the Lord.

This is the height of heresy.

The Lord reminds us, “I Am the Lord your God.”

You and I? We are not the Lord.

Living a good, clean life does not rocket us to the front of the line

Second, lets deal with the trap of contempt.

Because of the Pharisees self-imposed righteousness

He has developed a chronic disease known as spiritual superiority.

We all shift uncomfortably in our seats.

The Pharisee believed others were beneath consideration, worthless, or deserving scorn;

Especially those who intentionally broke the law of Moses,

His disdain is exposed for all to see.

Contempt is a delusional belief that we know better than God

who should or who should not receive God’s mercy.

We do not know better than God.

The Lord knows better than anyone

Where his mercy and grace are to be spread.

Mercy is the Lord’s prerogative and

Ours is not to judge.

Jesus is criticizing those who distinguish

Ourselves and our values from

All are sinners, loved anyways.

All are fallen, redeemed anyways.

Even the most righteous still come up short of perfection, are saved anyways.

When we think of ourselves as holier than thou,

Better than “one of them,”

Our exalted contempt is flipped upside down by Jesus

And we find ourselves humbled.

Who are the “one of them” people in your world?

Are they communists, socialists, or a member of the opposite party?

Are they drug addicts, street people, or crazy people released from the asylum?

Are they owners, administrators, managers, or workers in the trench?

Are they officers, enlisted, or civilians?

Are they people with HIV, members of the LGBTQ community, people getting welfare handouts, or people with developmental disabilities?

Are they convicts, inmates, or felons?

Are they pimps, prostitutes, or people caught with their hand in the cookie jar?

We do love to paint people with a broad brush,

Lump people into stereotypes, because

Then, it’s easier to build a wall between us and them.

does violence to the individual.

Every “one of them” has a name,

Every “one of them” is a child of God,

A person of worth,

Jesus died for every “one of them,”

Just as he died for me.

The traps of this simple parable are harsey and contempt,

Turns the world upside down.

Grace comes to none other than the foil of this parable:

No one saw that coming!

The twist of this parable would have taken the breath away

It should take our breath away, too.

In the time of Jesus.

They were hired contractors who worked on behalf of the Roman Empire,

The enemy occupiers of Israel.

These scoundrels would collect taxes

In neighborhoods, on highways, in markets, and at the dock.

Their take was anything they could collect above and beyond the Empire’s regulation.

They were dishonest, greedy, opportunist, collaborators;

Willing to victimize their own neighbors, family members, and friends.

Jesus, a respected Rabbi, associating with tax collectors would be scandalous in the eyes of every observant Jew.

Why would Jesus spend time with the likes of this?

In the parable, the tax collector stands far off.

He was probably afraid the roof of the Temple would collapse on him if stepped through the door.

He beats his breast, begs God for mercy, and confesses his sin.

He doesn’t promise to repent or change.

He doesn’t offer to go get an honest job.

He doesn’t volunteer to join the underground and become a part of the resistance.

“This man went down to his home justified,” Jesus declared.

The Pharisee had written him off.

But God had not.

The tax collector could only speak of his own brokenness.

And he is exalted.

Such is the nature of God’s absurdly generous grace.

This parable of the Pharisee and the tax collector

Warns us of the dangers of righteousness.

Living according to the law has mostly an upside to it, but

Yet, it has dangers.

The danger is that our trust can turn away from God.

We can turn inward,

We are warned of contempt;

For it reveals spiritual superiority,

Unsightly disdain for children of God.

Don’t fall into the trap.

Indeed, even the most righteous of us,

are in need of contrition, repentance, and forgiveness.

This parable resolves itself,

A core characteristic of God.

We are launched into the upside down world of Jesus,

Where those who exalt themselves will be humbled,

And those who humble themselves will be exalted.

Confess sins; the big, the little, the intentional, even those unknown.

Abide in this upside down world of Jesus

known as the Kingdom of God.