Our two week visit to Telica was coming to an end.

Vacation Bible School (VBS) had been a big hit. Each of the three hundred children who attended received a roll, something to drink, and a dose of the Good News every day. It is painful for me to contemplate the fact that, for some, this may have been their only meal. Nicaragua is the second poorest nation in the hemisphere. At least every child knew they were loved by God and their new friends from the north.

The three houses the other members of our team had been working on were turning out pretty good. Concrete had been mixed on the ground, poured into shallow footers, and cinder block walls had risen to give shape to new houses.  Even a 12 foot deep bano had been dug out back of each, covered by a properly secured one-holer. The women and children who would become the new home owners need some sort of protection when they have to use the bathroom in the middle of the night.

Distributing clothing and medical supplies had been gratifying, but not nearly as fun as hosting a baseball tournament for all the kids in town and buying each of the players boiled, under-sized hot dogs from a local vendor.

I was tired and I wasn’t going to miss the hard cane bed I had been sleeping on each night.

Our team of 20 North American teachers and builders assembled our final evening at the three newly constructed houses as I put on my liturgical game face. We dedicated each house to the glory of God and handed over the keys to each new home owner. 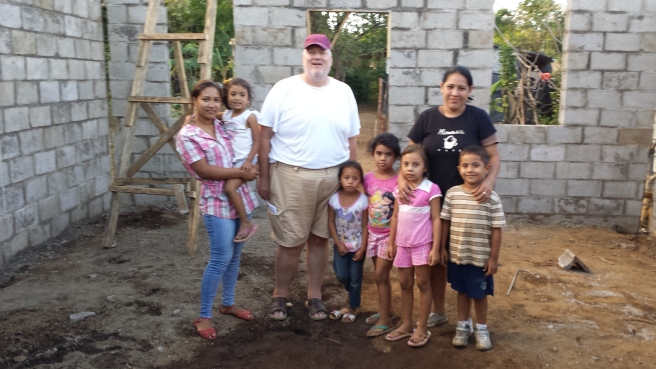 Well, to be honest, the keys were metaphorical, since the doors were still to be built. The roofs would also have to be installed after we left. But each house was close enough in my book to go ahead with the dedication.

After the celebration was completed and the neighborhood crowds had dispersed, Beemer sought me out and pulled me aside. There was a frantic look in her eyes as she held up a paper for my inspection.

Remember, this Gringo no hablo Espanol!

It looked like a past due electric bill and Beemer owed … Let me see. I did some quick calculations in my head. Carried the two, multiplied by the exchange rate, and rounded up for safe measure. It looked like Beemer was hitting me up for about 6 bucks. Six bucks!

Sure, I thought to myself, having yet to read “When Helping Hurts” by Steve Corbett and Brian Fikkert. I pealed out the foreign bills without a moments hesitation. Instead of joy, I saw Beemers countenance fall, even as she forced a smile, thanked me, and turned and walked away.

I failed to understand. At the same time, I assumed something wasn’t right.

Right before turning in, most of us were sitting in front of the house in cheep plastic chairs watching kids playing foot ball in the street. Families had come to say good bye to us, thank us for our efforts, and giving us their blessings. We were headed out first thing in the morning. Emotions were raw and many eyes were filled with tears.

“You see Beemer this evening?” I overheard one ask another.

“Yeah. She was asking me to pay her electric bill.”

“She was?” I piped in, even though it wasn’t my conversation or place to speak. “She asked me the same thing.” I felt anger begin to bubble up, as if I had been played for a fool. I assumed I’d been scammed. How could I have been so dumb?

“Yeah. It was her electric bill five months in arrears. She owed thirty bucks, but she’d only take twenty-four.”

The universe stood still. Comprehension was slow, but coming.

I deserved this hard mat bed, I later thought to myself in the dark, when no one else could see my eyes filled with tears. This is what I get for making assumptions and being so wrong, so very wrong.

I assumed Beemer was scamming me. She wasn’t. I assumed the bill was for one month; it was for five. I jumped to the conclusion that Beemer was dishonest; yet, she was so honest that she only accepted that which she owed, nothing more.

And, oh. By the way, some of those Dollar Store extension cords in Beemers house were supplying electricity to her neighbors as well.

Poverty isn’t about money or wealth. Here I found myself broken and poor, deeply in need of repair, desperately seeking God’s redemption. I had sinned against the maternal voice of the neighborhood, the tamale baker of Telica.

Lord Jesus Christ, Son of God, have mercy on me, a sinner.

Early the next morning, Beemer showed up to see us off. Her gold teeth glittered as she smiled. She gave me a bear hug, turned, and disappeared as she walked away.